After a decade of growth and a partial recovery in 2010 after the economic crisis of 2009, electricity demand fell again in 2011 as the European economy struggled with the prolonged sovereign debt crisis (Figure 1 and Table 1). Amid these changing macro-economic conditions, but also in light of the on-going transition of the energy system at large forecasting electricity demand up to 2020 is proving extremely difficult and, sometimes, erratic. As a consequence, demand forecasts have been revised downwards compared to last year's edition. 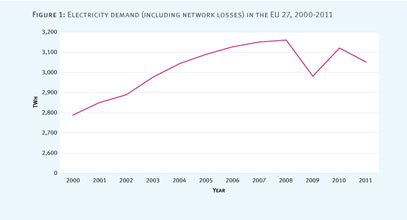 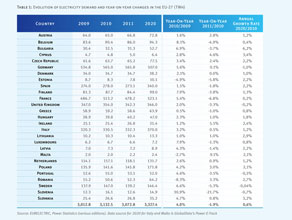 The EU's renewables capacity increased yet again in 2011, reaching 34% of total installed capacity (Figure 7). About 25 GW - including hydro - were connected to the European electricity grids in both 2010 and 2011. In the context of a shrinking demand, it would appear that these new renewable capacities have been set up as the result of subsidies rather than demand incentives. While the attention of the general public focused on the effects of Fukushima and the subsequent German decision to phase out nuclear power, nuclear capacity in all other member states actually grew by almost 1 GW between 2010 and 2011. 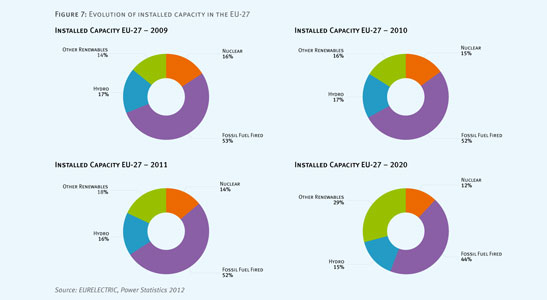 Electricity generated from hydropower decreased by 57 TWh or 17% in 2011 compared to 2010(Figure 8). The substantial decrease was driven by adverse hydrological conditions, particularly in southern Europe. However, the drop in hydropower was partially compensated by other renewable plants (+47 TWh or +16%). 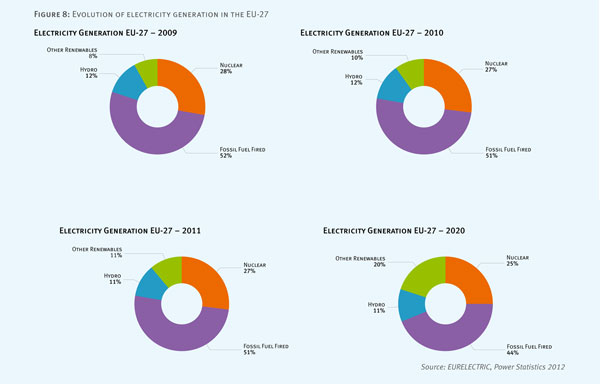 Renewables progressively move to the centre of electricity systems and both capacity and generation are expected to be substantially higher in 2020 than today(Figures 7 and 8). By 2020 45% of all power plants will be renewablebased, generating some 31% of Europe's electricity. Low-carbon electricity from nuclear and renewables will account for 56% of all electricity generated.

The importance of variable renewables like wind and solar (Tables 2 and 3) is making a holistic approach to managing the power system increasingly urgent. A portfolio of options is available to back up renewables, from interconnections between power systems - as exemplified by the Nordic region in Figures 10 and 11 - to (large-scale hydro and pumped) storage, flexible generation and demand-side participation.