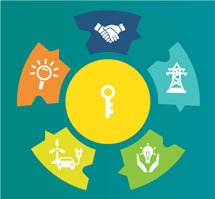 Europe needs to ensure secure, sustainable, affordable and competitive energy for all its citizens and businesses in the midst of the ongoing energy transition. The Energy Union - based on five mutually supportive dimensions - energy security, solidarity and trust; the internal energy market; energy efficiency as a contribution to the moderation of energy demand; decarbonisation of the economy; and research, innovation and competitiveness - is intended to address these challenges.

The European power generation mix is becoming increasingly low carbon with a growing share of renewables. In 2014, 56% of electricity generated in the EU came from low carbon sources. The total power generation in the EU in 2014 was 3,025 TWh, with 27% generated from nuclear, 42% from fossil fuels and 28% from renewable energy sources. At the same time final electricity consumption has been decreasing gradually since 2008. Electricity is on track to becoming a carbon neutral energy carrier and if used more widely to replace fossil fuels in transport, heating and cooling, more electricity can actually mean reductions in greenhouse gas emissions and more energy efficiency.

Renewable power generation increased by 38 TWh from 2013 to 2014, while over the same period fossil fuel fired power generation declined at an even faster rate: 121 TWh decrease from 2013 to 2014. The increase in renewable generation capacity can largely be explained by the use of different types of support schemes, as the EU ETS prices remain relatively low (just above €8), despite the recent price increase trend. The costs of renewable technologies have been falling, but at the same time the wholesale prices have decreased. Thermal generation capacity has been decommissioned due to old age, unprofitability, and the evolution of European environmental legislation. Fossil fuel fired plants face difficulties to remain profitable as a consequence of a decrease in running hours and low wholesale prices.

Regarding security of supply, the share of indigenous energy sources in the power mix has increased, but at the same time the decrease in firm and flexible capacity provided by thermal generation results in challenges for security of supply. Many markets today face a paradox: back-up capacity is needed to secure electricity supply for customers, but the incentives to ensure availability of such capacity are not in place. More flexibility is also needed in the power system to respond to increasingly sharp short-term variations in power generation.

Significant progress has been achieved with the day-ahead market coupling, but a fully integrated internal electricity market is yet to be reached. Further progress is needed to develop of cross-border intraday and balancing markets. Wholesale prices remain at a low level in Europe compared to the cost of most generation and storage technologies. This can have consequences for decarbonisation and security of supply.

The energy transition is bringing unprecedented challenges and important opportunities for the sector and power companies continue to invest in innovation despite the difficult economic circumstances. 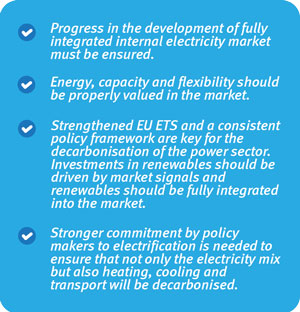